One of the biggest discussions surrounding the 2017 snap General Election concerns the plausibility that while the Conservatives will retain enough seats to win, their drop in the early polls could indicate Labour clawing them out of a majority. This would leave the UK parliament with a Victorian age hanging or ‘hung parliament’ to be precise. The prospect looks down upon the hot button issues of the welfare state and European Union as mewling infants for its geopolitical repercussions command the very parties at play today. So how did we even reach the potential for this conclusion? The 1885 General Election tells all.

The acts that do follow bear relevance to a post I put up earlier in the week concerning the Peterloo massacre so do check that out! 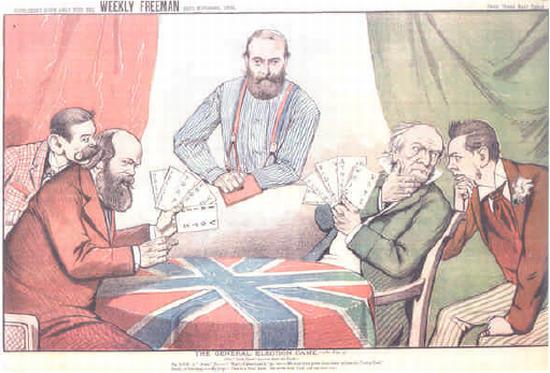 A hung parliament requires specific conditions to be nurtured, conditions not available to the British electorate before 1885. Condition one being the Representation of the People Act 1884 AKA Third Reform Act which struck a chord with the rural population who at last could vote alongside their urban friends…as long as they paid an annual rental of £10 (£1150 today) and or held the same amount in land. Elitist as this may sound, the electorate did grow from just 214,000 (less than 3% of population) a century earlier to 5.5 million even with female suffrage being a thing of the future and 40% of the male population stuck waiting with them. shock waves even felt as far as the Highlands where even crofters (small farm owners) became eligible to the extent they were empowered to take action against evictions and rent increases at the end of the Highland Clearances. This aristocratic and devastating agricultural revolution was even laid to rest when the Gael pushed through the Crofter’s Holdings Act of 1886! Legislature giving votes to the poorer can’t be a conservative act can it!? Of course not as Liberal leader Gladstone made sure it passed both houses even at the expense of the further Redistribution Act as Conservative Lord’s concession and our second condition.

Our second condition being the Redistribution of Seats Act of 1885 was established on the orders of Queen Victoria who feared a constitutional crisis from the fallout of the representation Act. In what was to become known as the Arlington Street Compact, Conservative Lord Salisbury invited Sir Charles Dilke, President of the Local Government Board and radical republican, to his Arlington Street home in Westminster on behalf of Gladstone. Their discussions resulted in the agreement that the majority of MPs would be elected in single member constituencies thereby equaling the political landscape for both Liberals and Conservatives. This pleased Salisbury’s dreams of Villa Toryism as it separated the suburban boroughs from the inner cities which we can see today from how constituencies like Winchester and North West Hampshire are separate despite both being in the same county. Overall what had occurred was an increase in representation from 652 seats to 670 alongside the people now entrusting their communities to those who provided them with work rather than the landed gentry. Unfortunately this came at a cost with the break down of bipartisan cooperation that followed the removal of two member constituencies meant that the Conservatives could begin to slide into cabinet domination until the Asquith administration in 1908

Adding this all up makes a country with more political diversity which makes for a dangerous cup of tea especially when the prime minister is ousted for the Three Acres and a Cow Amendment. This left Liberal Gladstone to sweep up the prime minister-ship as the leader of the party with the most seats at 319 to the to the Conservative 247. You’d be right to note that this is not a huge margin and therefore why it marked the first hung parliament in British history. So what was this dangerous cup of tea I speak of that brought this on thanks to the two aforementioned conditions? Well elegantly put- The dreaded Irish!

Not my words I can assure you but more likely those of Gladstone whose premiership only lasted a couple of months after his proclamation for Irish home rule split the liberal party and the confidence of the British people. The Irish come into the fray with the 1885 General Election as it was the Irish Parliamentary Party who not only wiped out the Liberals in Ireland but also claimed the 86 seats which could have prevented a minority Liberal government. All thanks to those two acts, the Irish electorate tripled from 229,204 in 1880 to 737,965 in 1885 as nationalism and unionism grew steadily in the Irish populous. Why would an Irish farmer with this new political consensus alongside his newly awarded suffrage vote for a Liberal MP whose Anglo-Protestant brethren allowed the status of Irish land to become questionably unstable? One observer after the 1881 Tyrone by-election was clear on such n argument, commenting: “The fact is the Protestants as well as the Roman Catholics do not want an Orangeman or even a Fenian if he is a gentleman or a landlord.”

Print of IPP Leader Charles Stewart Parnell and MPs in 1886

Irish democracy therefore drafted the Irish Parliamentary Party and its recently elected leader Charles Stewart Parnell into the Westminster contest who brought with him his National league of harnessed agrarian and nationalist protest. It was this development which brought Irish home rule to mean a ‘nationalist’ struggle and his support for catholic education cemented the selection of his MPs in all Irish counties excluding the Protestant Ulster and the surprising South Armagh. If it wasn’t for the Representation or Redistribution Acts than it would be very likely that the idea of Irish home rule would’ve not even been considered by the Liberals looking to appease the IPP only adding to Irish frustration. So in a sense, Westminster exchanging Liberal and Conservative leadership more times than your  twitter feed may have created a parliament in consistent crisis, but at least the Irish were temporarily subdued….

Salisbury and Gladstone did indeed swap the job numerous times so I am happy to pardon the confusion of both the reader and I.

There is much more to be said on Charles Stewart Parnell and the IPP both before and after the 1885 General Election as well as the entire contentious concept of Irish home rule! I’ll leave that for the future though as for now i’m off to vote…