Not some much in the geological or pop culture sense as much as the explosive reverberations which you will come to feel yourself. Yes it’s that time of the month again for our centenary regression to the Great War and more explicitly the 7th of June 1917. That day alone saw two years of allied multi-national work go up in smoke along with bits of the Belgian countryside all at the expense of 10,000 German troops and probably a few unfortunate cattle. While we may not concern ourselves with the Battle of Messines itself which followed, we can certainly have a blast looking into the largest non-nuclear explosion to rock the history of conflict.

454 tonnes of ammonal and gun cotton mines seems a bit excessive I hear you say. Well yes but you must consider the allied desperation to take the frustrating Ypres Salient. Imagine that you are Sir Herbert Plumer, bushy mustache and all. your Second Army is occupying the Salient against the German XIX Corps who have you pinned down by heavy artillery fire on all three sides of the salient with both the higher ground of the ridge and forested cover running from Wytschaete to Zonnebeke. This is a ridge the Germans have held since the 1st of November 1914 and no amount of continuous winter fighting, German gas and flamethrower attacks (the first noted in warfare), urban destruction or Hill 60 exchanges could budge any progress. So much so that the April before the Second Battle of Ypres saw the civilian population return to the town despite the constant bombardment which would later destroy their homes. Just think, if the locals were fed up, how willing Plumer was to listen to Engineer-In-Chief of the British Expeditionary Forces, Brigadier-General Sir George Henry Fowke, (a title longer than Plumer’s patience i’d imagine) when he suggested on the bequest of Major John Norton Griffiths that they blow the Boche up from below.

It was this Major Griffiths who began the ill equipped BEF’s offensive as he supplied the tunneling teams with moles as they were called who were under contract from his engineering firm when they were building Manchester’s sewer system. The Home Office rushed to create eight tunneling companies once the Major had demonstrated the mole’s stealthy and efficient clay kicking technique to Kitchener himself, even going as far as to flop onto the floor in front of the Field Marshall! Their work had started by 1915 and by the following year, several deep mine shafts marked as deep wells and six tunnels with the longest reaching 660 meters had been dug. The work of British, Australian and Canadian mining companies did not go unnoticed by the Germans however as seen by the camouflet set under the La Petite Douve Farm mine on the 27th of August 1917 which killed four and set the allies back by 120 meters. 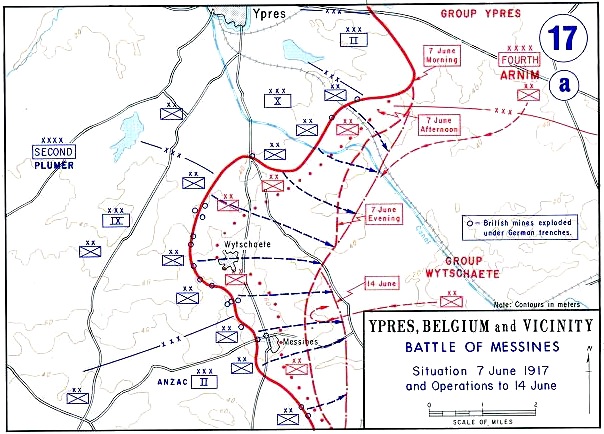 Map of the mines lain prior to the battle

The German counter-tunneling companies were well aware of the earthy intrusion yet what they had not grasped or excavated deep enough to find was the extent at which the allies would go just to advance on to Passchendaele. 26 mines in total with a collective explosive charge of 508,000 Kilograms of explosive charge had been set. Even-though 27,000 was not actually used, due to it being too far behind British lines by the time of the battle’s commencement, what had been used would rival the 0.3 Kilo-tonne trident missiles of today. Quite interestingly, the explosive charge set at the German strong-point of Birdcage 3 which was not used was actually later set off in 1955 by lightning, confirming that the British do have a rather odd relationship with the weather.

As zero hour for the German neared, Australian Captain Oliver Woodward working as a tunneler recounted the harrowing minutes his work brought:  “At 2.25am, I made the last resistance test and then made the final connection for firing the mines,” Woodward wrote. “This was rather a nerve-racking task as one began to feel the strain, and wonder whether the leads were properly connected up… breathlessly we watched the minute hand crawl towards the 10 minutes, then, with white faces, we strained our eyes towards the enemy line, which had become visible in the grey dawn.” Indeed the leads were very much connected as the 80,000 infantrymen poised to charge when the big bomb blew were almost all concussed by the 19 second long explosion. It instantly obliterated 10,000 Germans, dug craters with the largest being 80 meters wide and 15 meters deep as well as giving Lloyd George a bit of a fright back home in London. One British lieutenant even went as far as to described the grisly details of finding in one crater no human remain larger than a foot encased in its boot likewise: “I saw a man flung out from behind a huge block of debris silhouetted against the sheet of flame,” 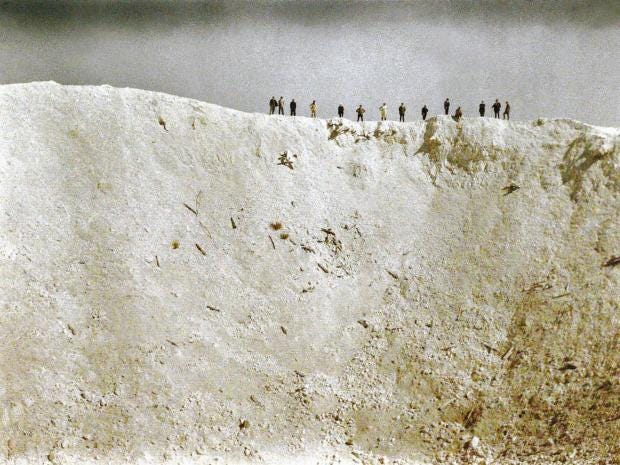 What had occurred in those few seconds set the precedent for what was to follow on the Western front as the rather large surprise attack allowed the allies to take the ridge after 25,000 further Germans perished in the battle. It forced the Germans to move reserves to Flanders from the Arras and Aisne Fronts thus relieving the struggling french forces so they could move on to the ultimate goal of capturing the Belgian coast all the way up to the Dutch frontier. Rather inpressive isn’t it? Lloyd George thought so too as he wrote in his 1934 war memoirs with much reflection: “The capture of the Messines Ridge, a perfect attack in its way, was just a useful little preliminary to the real campaign, an aperitif provided by General Plumer to stimulate the public appetite for the great carousal of victory which was being provided for us by GHQ.”

His words may hold apathy for those Germans killed but this spirit today is more in favour of cooperative commemoration as both the UK and Ireland seek to mark how the battle saw the first time the 36th Ulster and 16th Irish Divisions fought together despite differences back home. The shared ceremony today (today being the 17th of June) will take place alongside that of its New Zealand counterpart to remember all who were lost, sacrificed and worked tirelessly to ensure the battle of Messines and the war itself would come to an end.