The Bard, The Sweet Swan of Avon, The Immortal, The National Bard of England and An Upstart Crow… Yet three quarters of his plays delved into the comical theatrics of lands further afield, Why?

The Merry Wives of Windsor being the only play in contemporary setting was an intended piece of satire published in 1602 and allegedly commissioned by Elizabeth I with a two week deadline according to John Dennis 1702. As such this satire was intended to give the queen a giggle while remaining as political as his other works only this time it dabbled into the realms of sexual and family politics. 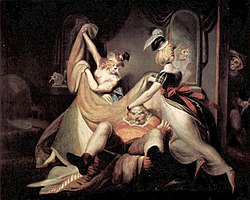 This particular play restricted his usual critiques of political nobles as unlike his other plays, he couldn’t mask the resemblance of his British characters to the British elite they resembled by means of altering the location to make it seem like a mockery of foreign nobility. To divert around this he used the before mentioned family and sexual politics as well as one of the characters mirroring a crude representation of Fredrick I Duke of Wutemburg as seen by the handsome chap below.

The second reason we have to look overseas for many Shakespearean locales is because SHOCK HORROR… They’re not his own work! Well not a majority of the plot at least. He actually tended to take European tales and manipulate his own themes into them, introducing new characters, developing the atmosphere etc. By doing this he left the setting in its original form such as Hamlet, the prince of Denmark not straying too far from the legend of Amleth in the works of Saxo Grammaticus.

The unfortunate third falls to prejudice. Elizabethan audiences upon hearing “Italy” or “Italians” would sit up and be prepared to be sucked into the bard’s plays. This is because the assumption at the time most likely from the influx of emigrating Venetian Jews was that the Italians were violent yet passionate characters. So in that sense, there’s no wonder 14 of the 37 plays were set in that one country alone.

If it wasn’t for political censorship, manipulative plagiarism or anti-semitism than we wouldn’t have St George overshadowed by the playwright who brought us and coined the verb “to swag” (Henry V Act ii Scene IV/ Midsummer Night’s Dream Act III Scene I)

4 thoughts on “Britain was never the soul of Will-Why do Shakespeare’s plays gravitate abroad?”