Image of the famous Bed

As a child, the 1971 film Bedknobs and Broomsticks often filled me with joy, with the mix of animation, upbeat songs and fun story providing me with many hours of entertainment as a child. The film for you of those that haven’t watched it (if not, get on Netflix now to watch it), is based in Southern England during the Second World War, with a trainee witch taking in 3 evacuees children from London, and having many adventures with them, including a trip to the very multi-cultural Portobello Road Market through a travelling bed, going to the Isle of Naboombu- a fictional island, and later fighting Nazi invaders through an array of British historical armour.  However it isn’t until as an adult where I have re-watched it, that I realise just how great a film this is at subconsciously teaching us British History. With the Portobello Road, we see the different armies that made up the Empire Army in the war, and at the end we see the suits of armour from different periods within British History.

Even From the Beginning, Credits Set out Like Bayeux Tapestry

As we can see, even from the beginning the film uses the Bayeux Tapestryesque, which in real life depicted the events in the build up to the Norman Conquest of England, which of course was the invasion in the 11th century by William the Conqueror to take the British Throne: the battle perhaps most known for the famous Battle of Hastings in 1066. Straight away from the beginning of the film we can see that British Heritage is oozing from it. As a child I never picked up on it, however when watching it again as an adult, it becomes more obvious.

The Best Scene of the film highlighting Empire, well worth watching!

Following on with the idea of British Heritage, one of the best scenes in the film is the Portobello Road Market scene, where the children travel with Miss Price and Professor Browne to Portobello Road to find the rest of the book for a magical spell. However one of the things that strikes me in this scene is the fact alongside a dance number, we have a great idea of the diversification of the British Empire, and the different cultures involved. We see everybody involved in the “war effort”, everybody joining together. Within this scene we see soldiers, sailors and RAF men all joining together to play in the band. We see the sailors dance, we see what looks to be the woman corps of the British Army being strong and turning down the actions of the sailors. But that is not where the fun stops or where the idea of Empire stops. We further see a group of Indian Soldiers join in and carry out a Bollywood style dance, we see Scottish Dancers in traditional Scottish kilts enjoying the atmosphere, and then this is ended with Caribbean soldiers, most likely from Jamaica playing Calypso music. It illustrates not only the diversity of the Empire, but the pride of what it is to be British, the fact that the Empire boasts all the different cultures and can unite against the greater good, in this case the Nazi Soldiers.

And so we come to the last point and another great part of the film. The Nazi’s have invaded mainland England, taken the family captive in a castle, most likely to be Corfe Castle in Southern England. In order to the escape, the Witch Miss Price uses a spell in the castle’s museum to wake up all the suits of armour to fight the Nazi threat. The reason that this scene of the film is integral is it truly shows a large majority of British heritage. You start of the drum sounding them all to war, the colours are raised and what we see is knight armour come alive. We see the flags fly like they would have done in the Medieval time, where Britain often had to defend itself from other threats, and they are joined with the Red Coat Uniform army who were popular in the late seventeenth century, used mostly in the Commonwealth (which in itself again illustrates the multiple cultures of the Empire). We see what looks like Cromwell Civil War style uniform, and they are all led to battle by the sound of Scottish Bagpipes. Now I could be reading an awful lot more into this than I should, but to me it emphasises the strong cultural heritage that Britain has, and that everybody unites towards the common enemy. It is a scene that really does illustrate the colourfulness of the past in this country, and the pride we should have in its history. 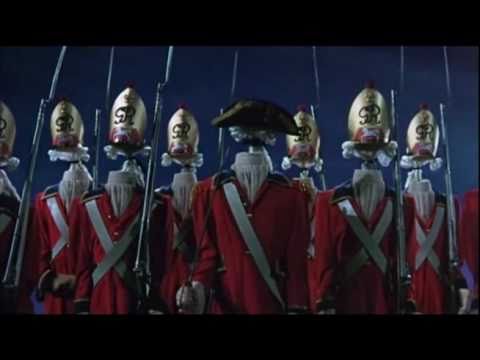 The Red Coats- One of the many illustrations of British Culture

So why then is this all important you ask? Well the film unbeknown to me as a child truly paints a clear picture of British past, as well as the fact that the Empire, though now the Commonwealth, is multi-cultural. It wasn’t until I was an adult that I realised that this film is more than just a good entertaining feature, in fact it teaches us a lot about British heritage, that “Britons never ever shall be slaves”. It argues the point, why is this not shown more in schools to illustrate how important Empire was in British society and integrating the different cultures, as well as the appreciation of the British army and its past. I hope you have enjoyed this blog post, and if you haven’t seen the film, then you must!

Image from the film- Bedknobs and Broomsticks